With the full-on launch of BLVK Label in the form of one-and-done disposables, you're probably wondering what exactly is in each device.  You know that we take exotic strains, cross them together, then use a mixture of both cannabis- and botanically-derived terpenes to give off that all-too-familiar (and tasty) flavor behind each strain cross.  What you're left with is an ultra-yummy and super-potent blend equally knock you off your feet and settle you in for an incredibly chill ride.

In this article, we're taking a deep drive on the role terpenes play in the overall experience behind what we as a cannabis brand strive for.  Terpenes, by and large, are the compounds that uniquely identify strains in aroma, taste, and overall feeling.  Without terpenes, cannabis in general would smell, taste, and behave the same.

WHAT MAKES A TERPENE, A TERPENE?

Terpenes are naturally occurring chemical compounds that create both scent and taste in plants.  Rosemary and lavender are two very aromatic plants and possess camphene, pinene, limonene, and myrcene for rosemary and linalool in lavender.  Without these very particular scent-inducing properties, neither of these plants would give off any of the added benefits these are known for.  On top of that, terpenes can be extracted to either alter or completely redefine how a plant and/or strain can interact with the body.  This is why you may have seen aromatherapy explode in recent years as brands and people have fully embraced the act of extracting these terpenes to help improve your overall quality of life. 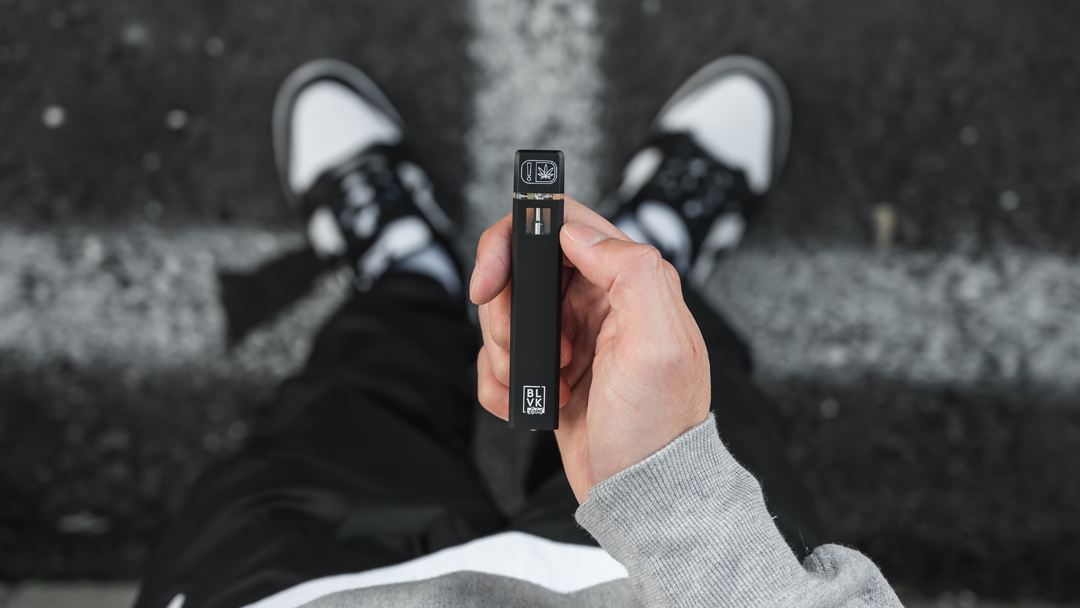 It is worth nothing that terpenes are not to be confused with terpenoids and cannabinoids.  Terpenoids are a result of oxidation from modified compounds.  Examples of common terpenoids are citral and menthol.

Cannabinoid compounds can be derived naturally from plants or synthetically made.  These compounds interact with the body's endocannabinoid system which affects the physiological and cognitive aspects of the body.

The entourage effect states that terpenes are one of the three essential compounds to contribute to the overall "high" that THC provides.  Manufacturers often use these isolated compounds to create different strains.  Each cannabis strain will have a different smell and taste; as well as a different experience attached to each blend.

Lastly, it is worth noting that not all terpenes are labeled as psychoactive because they generally cannot produce a high all on its own.  It can be arguably more important to select a strain based on its terpene profile versus just the THC potency concentration.  The idea is that each terpene can add different benefits to the overall experience.

To simplify the different types of terpenes, we can categorize them between indica and sativa strains.  While we label them as 'Chill,' 'Hype,' and 'Balanced,' the fundamental categorization remains the same.  By and large, indica strains tend to have a higher level of beta-myrcene due to the terpene producing more of a relaxing effect.  Dominant sativa strains often contain higher concentrations of alpha-terpinene as the typical experience associated is that of an energizing effect.

It is important to note that just because a certain terpene tends to be favored in indica strains, those same terpenes can still be found in sativa strains and vice versa.  Cultivators and brands alike can easily add or remove terpenes to their liking to achieving the desired profile.

While there are several types of terpenes, BLVK Label focuses on the most aromatic and flavorful ones.  We've listen the eleven most common terpenes, and what their main properties are that can help characterize each of our exotic strains.

Valencene is a sesquiterpene that gets its name from the place it's most commonly found: Valencia oranges.  This citrusy and sweet aroma is, for obvious reasons, synonymous of oranges, grapefruits, tangerines, and occasionally has a very woody fragrance.  The potential medicinal benefit valencene delivers is often associated with its anti-inflammatory and insectifugal properties.

To what extent valencene plays a role in BLVK Label?  Well, the terpene is also abundantly found in both Tangie and Mimosa strains, both of which are present in SunKissed and Hakuna Mimosa, giving way to that all-too-familiar citrus overload you'd expect in two incredibly tasty disposables! 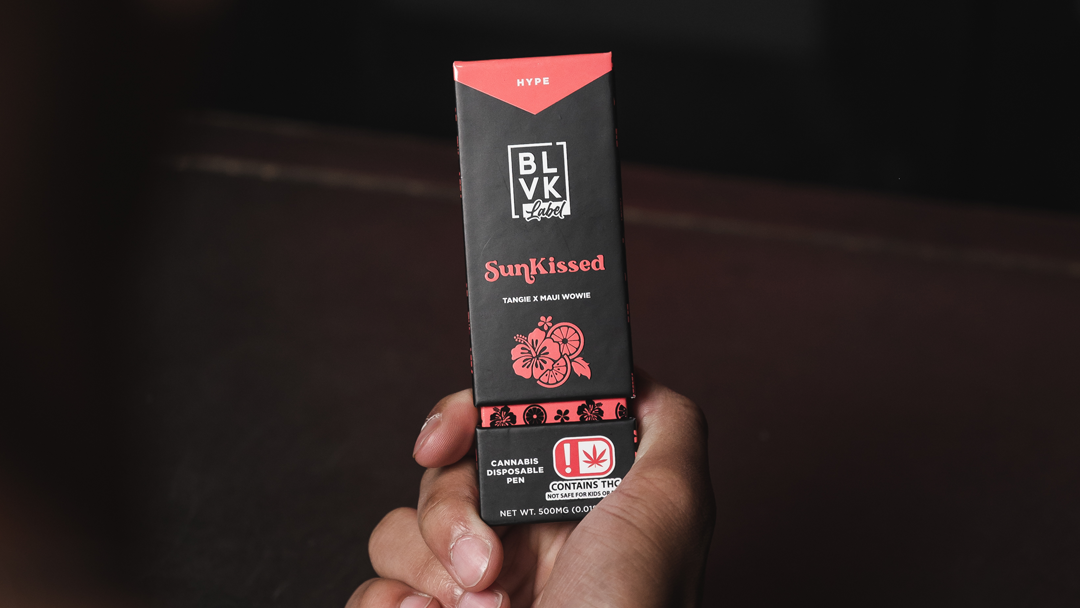 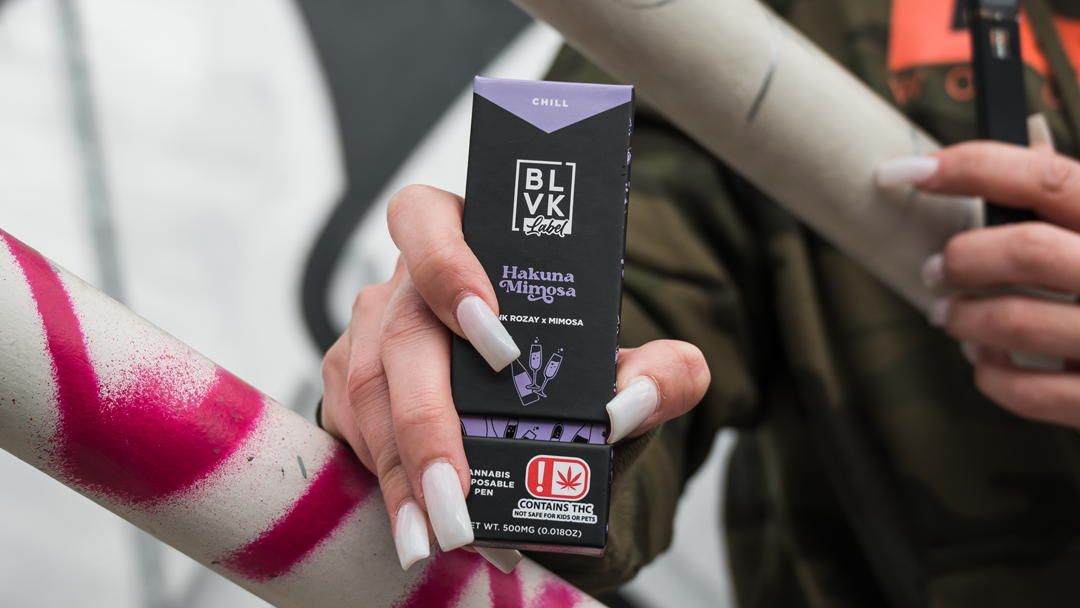 Also called beta-caryophyllene or BCP, this terpene can be found in aromatic plants such as rosemary, cloves, black pepper, oregano, cinnamon, and basil.  Since Caryophyllene is a larger molecule than other terpenes such as myrcene and limonene, binding to cannabinoid receptors is much easier, allowing for less of the psychoactive feeling most commonly associated with cannabis consumption is experienced.  As a result, some of the most common effects beta-caryophyllene-rich strains possess lean heavily in the anti-inflammatory and pain management categories.

Some of the most popular strains to date possess high levels of BCP, including but not limited to:

Given these strains, we can pinpoint this terpene being responsible for the heavy-handed, physically relaxing properties behind Suge Kush.  And sure, we classified Suge Kush as a 'Hype' sativa strain; nevertheless, while it will give you that creative jolt, you'll still be sinking down below in mellow vibes the entire time! 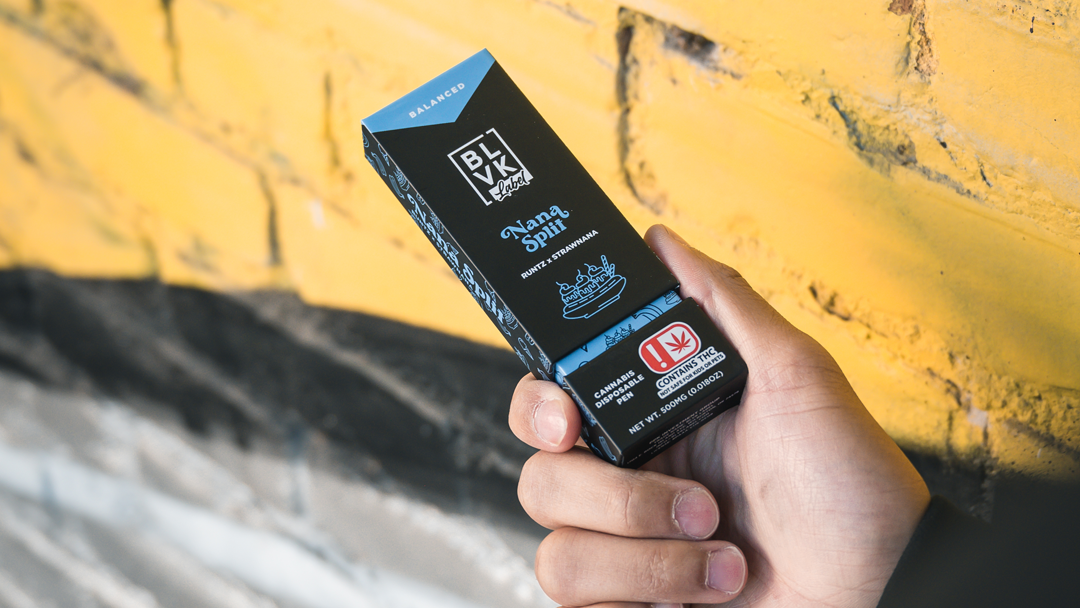 Just by looking at the above list, we can already see a couple BLVK Label strains possessing higher levels of limonene.  From a strain-specific perspective, Nana Split takes the cake with Strawnana as it crosses into Runtz to give off the minor fruity and sweet taste profile most commonly associated with a banana split ice cream sundae.  On top of that, the cannabis- and botanically-derived terpenes we add to each exotic strain cross to mirror the flavor closer to what you'd expect also possesses large amounts of limonene.

Limonene isn't just flavor and scent-dominant, either.  While little is known about how it works to the brain and body's benefit, what we do know is that in larger doses, limonene-rich strains have the potential to elevate mood, relieve chronic stress, and possess antifungal and antibacterial properties.  Next time you find yourself in some serious TLC, consider picking up Nana Split, not only to get a nice buzz going, but to also fix yourself to an extent!

Humulene is a highly aromatic compound most commonly found in hops, sage, and ginseng.  While the strain is not as dominant as the other three above, it plays a major supporting role in providing woody and herbal aromas to further aid in the experience of cannabis strains overall.  Typically you can find humulene-rich strains such as:

Beyond aroma and flavor, humulene is most known for its anti-inflammatory, antibacterial, and appetite-suppressant effects.  Researchers even went as far as including humulene in the treatment of cancer cells; however more research is still needed to fully understand to what extent the terpene is capable of in the presence of other cannabis compounds.

Linalool, while acting as one of the dominant terpenes found in a variety of cannabis strains, is not uniquely specific to it.  It's characteristic with lavender and an added hint of spiciness is common to over 200 other types of plants.  In fact, linalool is so common of a terpene that even the most staunch anti-stoners out there still manage to consume just as much, if not, more than we stoners do. 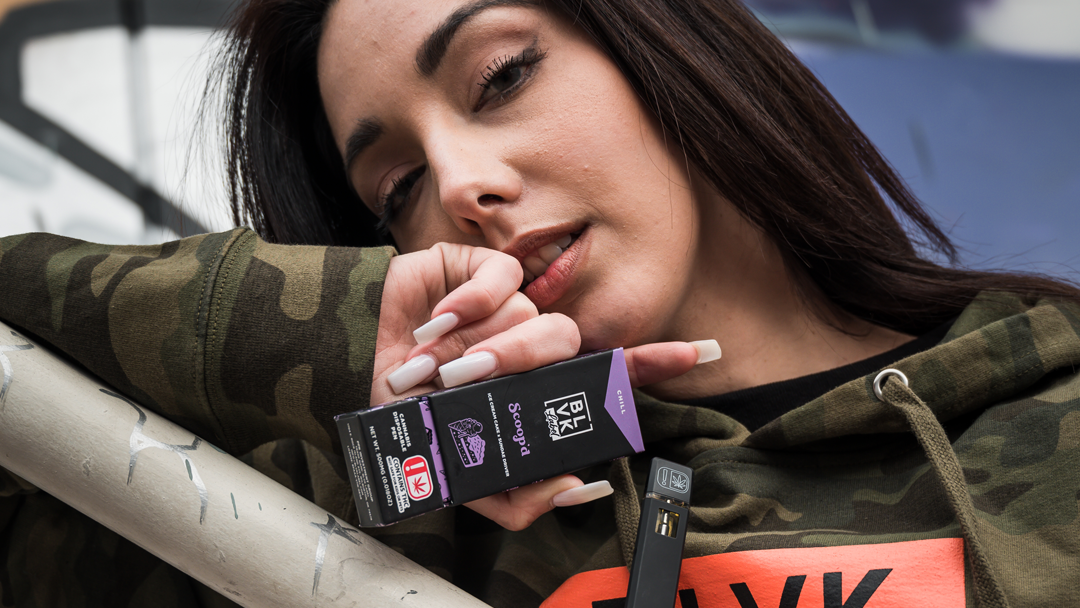 When it comes to BLVK Label strains, linalool exists as a minor terpene added through cannabis- and botanically-derived terpenes to enhance the flavor experience.  For example, in Cooks Ahoy!, the strain crosses consist of GMO Cookies and Biscotti.  Biscotti naturally possess low levels of linalool and we simply add in an additional amount of Chemdawg into the mixture to give off more of the spicy cookie texture to the experience.

Another example of linalool being added to the final flavor mixture is present in Scoop'd, which is reminiscent of an ice cream sandwich.  Just imagine, a decadent and rich vanilla ice cream sandwiched between two cakey cookie outer layers.  To achieve the cake aspect, we added a vanilla cake flavor-based terpene rich in linalool!

On a therapeutic note, linalool possesses anti-microbial, anti-epileptic, and sedative properties.  That's why upon consuming a cannabis strain rich in low levels of linalool, you'd often feel a slight numbing sensation, where you're both in a state of sedation while also being gently eased into a deeper state of relaxation.  This sort of easing into the high often leads to mood-regulation types of experiences such as a better response to anxiety and depression symptoms.

Similar to humulene, myrcene is another terpene most commonly found in hops and is responsible for the peppery, spicy, and balsam fragrance in beer.  In the world of cannabis, myrcene is one of the most dominant terpenes most commonly found strains such as OG Kush, Blue Dream, Grape Ape, FPOG, GDP, and Tangie.  And looking at the BLVK Label list of disposables launching in Oklahoma and soon-to-be in California, SunKissed features a great deal of the terpene.

But it doesn't just stop at SunKissed - since Myrcene is such a dominant terpene, its presence can be traced to nearly 20% of all cannabis strains to some degree or another.  So it wouldn't be far off to add every single BLVK Label strain as possessing moderate to high levels of the terpene, either.

On a therapeutic level, myrcene is often associated with it sedative and muscle-relaxant properties, most commonly found in indica strains.  In addition to physical relaxation, the terpene is also well-known for its pain management abilities, particularly as it pertains to increasing the brain and spinal cord's own opioid chemicals.

THERE ARE TOO MANY TERPENES TO COUNT

If we had all the time in the world, we'd break down each and every terpene present in our disposables.  Nevertheless, the six we mentioned above stand as the most dominant of the bunch.

Terpenes are essential to the experience that we deliver at BLVK Label.  They create the foundation of flavor and aroma for all the products we look to elevate your cannabis experience with.  And in so doing, these flavor-based experiences not only taste and smell great, but can seriously help you feel and function well, too!

All six BLVK Label disposables feature at least five terpenes designed to elevate the experience from both sensory and experiential levels.  Beyond just the recreational experience you'd feel after a sesh with one of our strains, it is more than likely that your body would respond to wellness function better than if you did not partake.  This should be reason enough to give our exotic strain based flavors a spin!